Palin accepted the invitation to visit Stennis, which is in the Gulf of Alaska participating in exercise Northern Edge 2009.

“When we saw the invitation come across my desk, we jumped at it,” said Palin. “We said, ‘Yes, whatever it takes, let’s get out there and let’s thank these fine young men and women for serving America on this carrier.’”

The governor’s visit began with an arrested landing in a C-2A Greyhound from the
“Providers” of Fleet Logistics Support Squadron (VRC) 30.

Palin saw Sailors and Marines in action when she toured the bridge, primary flight control, the hangar bays and a weapons magazine.

Palin spoke with approximately 400 Stennis crew members in hangar bay two and thanked them for their service. “I can’t tell you how much I appreciate you,” said Palin. “I love the United States military, and I thank you so much for the choice that you have made to serve something greater than self, to be serving your country and to be bettering our world.”

Approximately 20 Sailors who call Alaska home were in the front row and got the opportunity to speak with the governor and shake her hand.

The John C. Stennis Carrier Strike Group assets; USS John C. Stennis (CVN 74), Carrier Airwing (CVW) 9 and USS Antietam (CG 54) are participating in Northern Edge, a joint training exercise, which focuses on detecting and tracking of units at sea, in the air and on land.

I’ve been on the Stennis! My oldest son was stationed on it and my second oldest and I flew down to Hawaii and took a trip on it to San Diego then Seattle. Ahh, the memories!! Thanks Gov. Palin for visiting our troops! We know you really care about them!!! 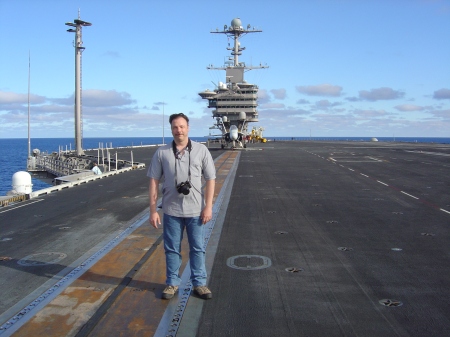 That’s me on the deck after the planes left.

This entry was posted on Tuesday, June 23rd, 2009 at 11:33 pm and is filed under Uncategorized. You can follow any responses to this entry through the RSS 2.0 feed. You can leave a response, or trackback from your own site.